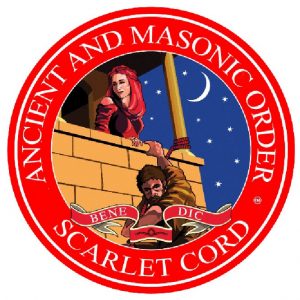 The Order of the Scarlet Cord flourished until 1929, when it fell into abeyance where it remained for nearly eighty years. The Grand Supreme Ruler of the OSM,M. Wthy. Bro. Peter Glyn Williams, decided to resurrect the Ancient Order and appointed 12 senior members of the OSM in November 2006, to organise the re-birth.
So in December 2006 the Scarlet Cord Conclave No. 500 was formed and Consecrated under the jurisdiction of the OSM. A Consistory of the revived Order was opened and the Founders were ‘introduced’ into the 1st. Grade and invested with the appropriate regalia.

The ideal size for each Consistory should be twenty members – this enables Companions to progress to the chair and become available for Provincial Rank and Grand Rank.
The Consistory has it’s usual permanent officers ie, Episcopus (Chaplain), Director of Ceremonies, Recorder, Treasurer, etc.
The progressive officers almost mirrors those in the OSM – i.e. President (Supreme Ruler), Primus of Lectors (Counsellor), Primus of Ostairii (Guide) four Lecturers (Visiting Deacons) and Guarder. To be installed, a President elect must have taken his 3rd. Grade and must take a Preparation Ceremony and receive a Patent from the Grand Summus authorising his predecessor to install him into the chair of his Consistory.

There are six grades of the Order.

The first three Grades meet in a Consistory
The 4th. Grade is conferred on Companions, who having proved their proficiency in the first 3 Grades would be recommended by the Provincial Grand Summus and, if accepted, would be invited to attend a meeting of the Grand Senatus where the aforesaid Grade would be worked .This is one of the most spectacular ceremonies in Freemasonry.

The 5th. and 6th Grade are conferred on Distinguished Companions at the personal discretion of the Grand Summus of the Order and would take place at a meeting of the Grand Senatus.